I bought my very first Versacarry [https://www.versacarry.com] product in November, 2017 – the Versahub® Bedside Mount platform. It works perfectly, allowing me to keep my handgun and one magazine within close reach. It’s durable, and useable in a few more areas than just the bedroom. A good investment!

I’ve just finished a read of a soon-to-be-released book that tells one family’s story about  the mass killing of students and faculty on February 14th, 2018 at the Marjory Stoneman Douglas High School in Parkland, Florida. 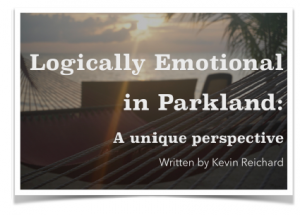 The book kept me fully engaged because of how it was written as much as for why it was written. Within a few short hours I had consumed 3/4’s of it—in one sitting. It was that riveting.

I have studied Active Shooter events since that term/label came into general acceptance many years ago. I’ve done a lot of research on the subject since 2012, and have read a lot of the how-to books, attended some of the local AS training seminars as well as that training provided to the public by the DHS, and I’ve pondered many of the difficult issues surrounding these events for the ensuing years.

I have my personal thoughts, and have come to some of my own personal conclusions. I also have zero first-hand experience, like most of us.

I hate to call this book a story but it really is. It’s a first-person’s view from the ground of what happened that day in a small community where too many believed that something like this could never happen.

I literally ran through most of this book because it was that captivating. It drew me in, and held onto me. I couldn’t stop, and I didn’t want to either.

Okay, so the core of this book is about the family. How this event changed lives, changed ideas, changed plans, changed perspectives, and changed kids that weren’t ever prepared for this. There is just such a great model here of what the American Family symbolizes to many of us. It’s a firsthand look into the atomic family—a dad that works hard to support his family, maybe with an un-conventional day-job, but I guess that depends on your outlook. A mother that gives back to the community in her own way and through her job. Two sisters that are on the verge of adulthood, but maybe just a few short years away.

Here’s the fallacy: The thing that will never happen here… does.

It all starts with a text message…

Through the first few minutes, then during the course of the ensuing  hours you will learn what it could be like for you, for your family.

One major difference from this point on is that you start to learn more about how this family functions—so many differences from the ‘norm’ that I’d guess most families adhere to. There is so much to learn from because of those differences though.

There truly is a lot to be gleaned here. Lessons that we need to pay attention to, and ultimately a conversation that needs to be had.

Having no expectations going in, I came out having my own at the end of the book, and here’s my hope:  I hope that you will purchase this book first and foremost for the best reason possible. Secondly, I hope that you’ll see it for what it has turned out to be—a call to all of us to come together to find workable solutions that will save lives. Thirdly, I hope that you’ll start to consider that we’re all in this together—even if and when we don’t agree on certain specific issues. We need to solve this together, there is no other alternative.

My thanks to the author, and to his family for sharing an event that had to be doubly difficult to re-live through this books birthing process. As tragic as the events were, it is uplifting to read and hear such a strong message from those who could have as easily turned away, and left us all with nothing more than speculation, and bad information that is all too often spoon-fed to us by the media—and with their agenda in mind, only.

The original Street Survival series, Volume One, Tactics for Armed Encounters was published in 1980 by Calibre Press and was co-authored by Ronald J. Adams, Lt. Thomas M. McTernan and Charles Remsberg.

What made this book unique at the time, and to this day, was that it was written in ‘response’ to the increase of fatal Officer encounters and the subsequent debriefing that produced tangible results as to whythese officers may given their lives to keep the public safe.

During the 1980’s, this series had such an impact on Law Enforcement that it was required reading in many Academies for several years. Its uniqueness comes about because of the studies that were conducted to pinpoint exactly why each Officer’s life had been taken. What these authors/Officers found was to have profound repercussions that still haunt many today.

The studies pointed out the many flaws in modern policing methods of the time – some of which sadly have still not been corrected.

Training errors were found, and solutions were put in place and implemented that did and still do save lives – every day. Today training programs are far superior to what was then available, and yet we continue to see failures, and deaths resulting from some of the same problems that plagued agencies almost 40 years ago. Equipment and tactics have evolved, and yet…

Today’s Officers face more violence, better trained criminals, with better tools, access to better training and tactics, and can expect more survivable encounters due to advances not only in medicine and trauma care, but readily available and far superior equipment than those Officers of the 1980’s. So, why are we still seeing failures, and losing too many good Officers?

This book is a gift to Law Enforcement from Charles Remsberg (one of the original authors of the 1980’s Series) and two seasoned Officers, Lt. Dan Marcou and Lt. Jim Glennon. It’s a gift, because they cared enough to not only write a ‘new Officer manual,’ but they put in the time and research to update and include those aspects that they felt were still requiring more or continued attention.

So let’s start with just a few highlights:

These are just a few of the reasons submitted as to whyOfficers don’t train, or don’t continually train. Training should be on going, and evolving.

If an Officer truly expects to survive in today’s world, he/she needs to re-adjust their thinking. No agency will ever have enough money, time or manpower to keep themsafe. After a certain point (the Academy) most everything will be up to them – including on-going training, and also likely some gear. Is your life worth some out-of-pocket? If not now, it may be worth considering before you are forced to change your perspective on that.

Officers get complacent because a large part of their job is non-incident critical. Things become the ‘norm’, and Officers let their guard down. “Statistical Probability” data blinds them, or fools them into becoming so. Don’t let that happen, to you or your partners.

“Routine is a myth” – don’t get complacent just because routine has become your norm. You need to work at eliminating the complacency, remove the word ‘routine’ from your vocabulary, and continue to remind yourself that nothing is a given.

Every day and every encounter typically starts off with some form of communication, and a large percentage of that is done verbally. The very first aspect of any communication is accomplished through nob-verbal means however – body language, facial expressions. Every Officer should acquire, pursue and master the knowledge available to them through various resources, so that they may masterthe art of communication with their public.

Some of the points that Jim presents:

a) Paralinguistics – the use of the four cornerstones of vervalization (rate, tone, pitch and amplitude). He also goes on to state that the delivery method may be more important than the words used. It’s a spot on conclusion, and so simple that it should be obvious. One last point to consider: the words not The unspoken words can be more important than the actual words that are used in communication.

b) Body language – part of the non-verbal continuum. Tells. Learning this portion of the language can save your life, and may be more imortant than the words used. It will certainly enhance your abilities to communicate, for you will discover insights into so many aspects of the signs that you have missed for far too long.

c) Instinct – that gut feeling. We all get it, but do we listen? Since it wasn’t a specific reference, I will point you to Gavin deBecker’s best seller, The Gift of Fear as a starting point to more insights.

d) Confidence shows, even to criminals – a large part of your presentation (communication skillset) is your ‘command presence’, which ultimately displays your level of confidence. Yes, it’s a form of communication. We’ve all seen it, and experienced it. Some are better than others at it, have you ever wondered why?

f) Behavior is dictated by emotions; emotions are affected/controlled by stress.

g) “Listen with your eyes.” How profound. Have you ever seen it stated so well?

h) “Cooperation is often the precursor to the experienced criminal’s attack.” Sometimes things aren’t what they appear to be – always be on guard.

A large part of what will keep you alive is your mental preparation. Some of that is your attitude. A portion of that is your will to survive. Another portion is your training, and most of that will be established in the preparation phase.

Criminals study you, and share their observations with their friends. Theystudy – you.

A criminal is unencumbered by the very things that constrain you:

Defined here as assaults that occur in less than 10′ and where Officers die 69% of the time. You needskills that will work within this range. When you are attacked, you will typically respond with your training – that is unless you’re not training.

There are so many great training programs available to Officers today that will complement their acquired abilities to overcome and prevail in encounters.

Your skills are perishable – you need to keep learning, keep training. Nothing is more important to your career.

“To prepare for what will happen, look to what has happened.”Gordon Graham

“If” leaves doubt, “When” institutes a belief.

“Train beyond competent, qualified and proficient to a master level.”

“Success breeds a sense of competence that may not exist.”

This book belongs in your library. There is so much solid information and there are so many excellent examples and ideas within these pages to learn and grow from that it was hard to put down. Keep in mind that the knowledge between these covers came at the cost of the lives of too many Officers that didn’t have access to this knowledge.