I will give you my two cents of what I have just reviewed in brief and without the facts that should accompany an opinion on an event like this, but with the perspective of a security professional who’s job it was to screen anyone entering our facility.

I will preface that with some background: I was a security officer at a health-care facility for almost 9 years. One of my daily mandated duties was to ‘screen’ anyone entering our facility for weapons. As a professional in today’s world, I took my job very seriously. I did the best I could within the ‘guidelines’ provided by the administration.

I also caught a lot of grief for doing so from people that should have been better informed, or perhaps felt slighted or even privileged. I can understand some of those sentiments based on growing up in what had been a much freer society until the events of 9/11. Sadly, that has changed many, many aspects of our society – “land of the free, home of the brave.”

During those years, I personally confiscated lots of weapons, including some that had me shaking my head. I learned how to do my craft by doing research, paying more attention than others doing the same job did, and by recognizing behaviors better. I learned about knives in particular, because in my experience that is what I would most likely encounter. I learned how to find the most likely concealment places, the most likely ‘open-carry’ spots, the ‘tells’ of carryin weapons, and really much more than made me comfortable. 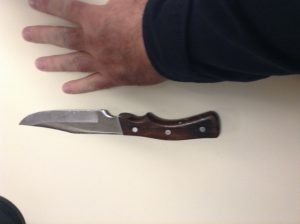 I can also confess to being afraid of who and what I might encounter. It was never comfortable, I never enjoyed it, and I resented that the world had changed and that this was one change that we had to ‘get used to’ as a result of someone else’s behaviors and actions.

I was raised to trust people, unless or until they provided evidence to the contrary. If anything I was most likely to trust blindly. Times have changed, and we have to extend our education to encompass many things that now make us uncomfortable. One of those things is the extension of trust, which necessarily has to be more constrained, more limited.

To the point, I learned through experience that not everyone is as they seem. Too many feel privileged and even entitled to have to stop, provide proper identification and identify themselves and their purpose for entering a facility like ours. They feel that it’s a public facility, which it is not, and that it’s none of our business. I understand that, but that’s not the reality.

Here’s the reality – we are a target. We are an opportunity for those that would do us harm. We are an open-door to a highly valued mission that hasn’t yet happened. We are a high-profile training op for those that would strike merely to test their abilities, to test our weaknesses, for their gain, and media attention to themselves and their cause. Nothing more. We do what we can in a too-limited sense in my opinion to keep you and your family safe. I take on that responsibility to make you feel safe, to keep you safe, and so that you don’t have to. 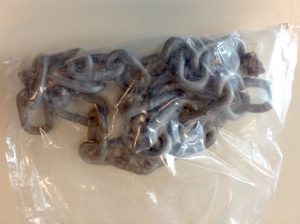 I don’t want to let anyone down because I wasn’t vigilant. I don’t want my family to suffer because I let down my guard and let something or someone slip through our ‘net’ because of trying to be politically correct or to try and appease that ‘sqeaky wheel’ that we have been taught to grease, to avoid the spotlight of public scrutiny. There are people like me that do this job, because someone has to, someone else chose not to. I am willing to put my life on the line for those that don’t understand or even appreciate that what I do is for them.

One last thought. Just because you are in a public place don’t be fooled into thinking you are safe, and don’t be complacent. Public places are places where everyone is ‘welcome.’ Think about that, because I guarantee you haven’t.

I would often be treated rudely by parents because I’d caution them to watch their own children more closely, to not let them wander freely, and to never let them use the bathrooms unattended.

I knew who wandered our halls, they didn’t, and we wouldn’t want to ‘alarm’ them so as to not make them feel uncomfortable. More politcally correct nausea that defeats security and actually empowers those that would do us harm.

Pedophiles, rapists, spousal abusers, thieves, murderers, drug addicts, those with mental healt issues/histories, kidnappers, muggers – they are ‘welcome’ in a public facility, and you will never know because of the politcally correct rhetoric and/or perhaps because of the laws that don’t allow that information to be shared freely amongst us.

Here’s my summation of what I viewed and based on my limited understanding of the facts in this video. I would like to know who shot the video, because it does matter.

I was under the impression that this ‘action’ was mandated by his supervisor, who was present and also due to the mother’s behavior prior to this pat down procedure – I think she’d either refused to cooperate or stone-walled TSA efforts to screen the family. I’d guess in the minds of the TSA staff that that type of behavior sets off alarms, as it does for me. Her behavior brought this on as it raised red flags for the TSA staff I believe.

This action is inappropriate under normal circumstances to most of us, and that’s what the general public is used to. As a security professional though, mom’s behavior sets off alarms for me. If you’ll recall at sometime near or around this event authorities had discovered an even younger child ‘carrying’ wearing an explosives vest in another country.

I also know that TSA had changed it’s frisk rules giving them more freedom and ability to do more thorough searches. Again, as a security professional, it’s a needed advancement based on the current status of what’s going on in our world, but still upsetting to many.

It’s hard to say it’s right or wrong, it’s obviously more wrong than right based on our common morals in the country in which we preside, but they are viewing it as a safety procedure.

I haven’t reviewed the new procedure, and after viewing this again, I can’t find fault with how this TSA agent performed his job (at the request of his superiors) – he was clearly very thorough. Patting, using the back of the hands in some areas (appropriate). I know approaching the groin area makes everyone upset, but you need to understand that many (and I’m not saying this child or children at all) conceal contraband in, or near their genitals, and rectum areas because they know it won’t be searched.

This is a part of our cultural taboos. The reality is that I’ve seen and experienced the results of non-thorough checks. In one instance a gentleman pulled a bag of heroin (evidence) from his rectum and swallowed it in front of staff, which created an emergency extraction situation – he could have died as a result, and his action made it our responsibility to act.

In another, a female representative conducted a weapons search on a female. Eventually a knife was discovered after the female had been turned over to our staff from this agency. Where was it hidden? She later told staff. So, a criminal mindset will use their knowledge of our standards and their criminal mindset against those that would try to prevent it. It’s a moral difference that we need to acknowledge, and understand that it is a reality.

I believe in this instancel this search procedure was done deliberately to create an atmosphere of discomfort for the family (a strategy perhaps?), maybe to design an outcome whereby mom would confess to whatever she/they might be hiding, or to surrender any contraband?

It’s really hard to assess without having all of the facts. You will need to remove the emotion though if you are to view this event, in my opinion. While overly thorough, and if you disregard that it’s a child, it was proper I believe based on what I know at this time.