In a recent post of an Active Shooting seminar, I’d seen an image where one attendee was role-playing and holding a ‘typical’ yellow rubber Beretta 92F style Martial Arts-style training pistol. 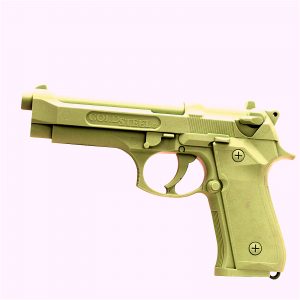 One reader had asked what it was and I pointed out what I thought I knew about that specific model. I mentioned a few other more realistic options that I’ve used in different training seminars and explained that it depended on the goal of the class as to how effective this prop would be.

What really struck me though was another comment that some of the attendees “might be concerned if there was a more realistic prop.”

After pondering this response, it got me to thinking – is this really a useful seminar or are we actually watering down the seriousness of the subject matter by introducing standard Martial Arts training tools – rubber guns or knives. Are we trying too hard to whitewash violence here? Is it responsible to train others in this serious subject matter without being as realistic as possible? 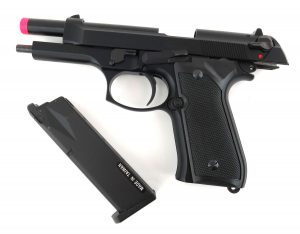 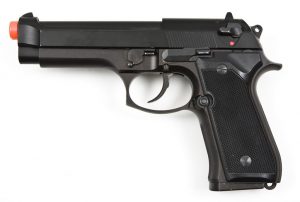 It came to me that maybe this prop wasn’t the ‘proper’ tool for the job, at least not nowadays and maybe specifically for this class. I am assuming that this was an Active Shooter Scenario in a class of the same meant for a group that would likely encounter an active killer. In the ‘industry’, the term Active Shooter is going away – slowly – but it’s going away and being replaced with Active Killer, at lest by Law Enforcement or in LE circles. A good start to get away from the whitewash, feel-good, limit-our-liability practices that I’m seeing around active killer events and the requisite follow-up training that is hastily thrown together for a buck.

What piqued my interest was the thought that maybe we ought NOT coddle our audiences. It’s akin to teaching Martial Arts as self-defense — one is about sport, the other is about survival. If we’re teaching others how to survive during an active killer event, wouldn’t we be doing our audiences more harm by being ‘polite’ than by showing them the realities of such an event in a realistic manner, or as realistically as we can in a classroom? Sometimes you just need to take off the kid gloves and put on your big boy pants.

Should we consider using at least more realistic training tools – like Airsoft handguns and long guns, and maybe aluminum knife trainers vs. their counterparts, the rubber feel-good ‘polite’ solution tools? 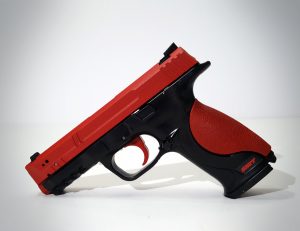 I’m suggesting that both tools do not hold equal value in this educational arena. In fact, I feel that using the more realistic replicas has MORE value than playing to the ‘polite’ notion of ‘not offending’ participants. Violence is ugly, and no one really likes to talk about it. An active killer event is likely the worst anyone will ever experience, and yet we’re afraid to offend someone that is attending a class to learn how to survive this type of event, really? 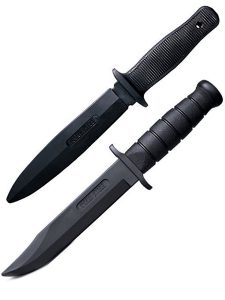 We are training these attendees how to survive a deadly encounter – gun or knife, and yet we’re refusing to look at the realities of what that encompasses. Why not at least expose them to something that is at least a bit more realistic. Remove the fear and misunderstanding, and try to use it as a teaching moment. Imagine being able to show attendees HOW to disarm a pistol by demonstrating how to remove the magazine from the pistol! Many of these alternate modern training weapons are designed to demonstrate many functionalities of their real-life counterparts. Semi-automatic pisol slides that move, safeties that actually work, removable magazines, moving triggers and even working takedown mechanisms.

In classes and seminars that I have attended, we’ve used both. It wasn’t an issue, and for those not intimidated by a gun specifically, they proved to be more valuable teaching and learning tools – they’re so realistic that they LOOK like real guns (if you ignore the BRIGHT RED muzzle) and often function nearly identical to the real thing. They are also made of metal and plastic, and some can even fire 6mm pellets. In fact, in some Police Academies they use Simmunition – about as realistic as it can get and still be mostly safe for the participants. Yes, they use an extra layer of safety measures, including special body covering, goggles, gloves, etc… 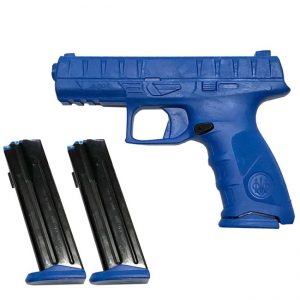 I think it’s time to address the watered-down A.S. classes and step-up up our game. If we’re going to teach about violence in this manner, it should be as realistic as we can safely make it. If we don’t, we fail our students. It should be responsible – we’re not selling fear, and should not be. It’s not and should not be about purchasing the advanced class(es).

I can share that I was on an Active Shooter committee for a large regional facility. I asked the hard questions. My goal was that whatever we wanted to put out there to my fellow employees had to be as complete and realistic as possible, but it also had to be responsible. As an example the facility chose to run with the new FEMA offering – Run, Hide , Fight. Bullshit. Still is. That’s not just my opinion, it’s what we were told at some other government-funded training that I had attended on my own dime. Think about that feel-good slogan being provided to our citizens. Sure, it might work, but if you don’t show people HOW/WHERE/WHEN and give them the TOOLS, you’re blowing smoke up their asses. And that is being irresponsible.

If you want to flesh it out, you need to provide the proper tools – posted maps: trained and drilled – where to run. It’s different for everyone, so be responsible and demonstrate, discuss, drill those routes and avenues of escape if escape is possible as your first or only option.

Fight – really? Okay, HOW? What will be effective? So many options once again. And remember, there are all kinds of people without my skills or your skills perhaps, so how do we train them and what do we train them that will work for them?

There is no single solution, and thus a slogan is nothing more than empty, feel-good bullshit marketing. See it for what it is. The only reason they put shit like this on your training sign-off is for their liability. “Look, he signed it right here and attended our seminar…” Don’t be stupid. That is ALL it is – a sign-off for liability reasons. CYA at the insitutiona level.

So next we were told by the chairman of our commitee that “it will likely never happen here. The chances are better of you getting hit by lighting more than once today.” O.K. More bullshit. In my opinion, he’s dead wrong and should have known better, and been more responsible for thise he was responsible to protect and I’m just not that stupid to think otherwise.

Next they wanted to sell us plastic covering for the windows. Oh, that’s awesome! You have found a bullet proof glass solution for those of us at the front doors? Well, no, it won’t stop bullets, in fact they will pass right through, but the glass wont go everywhere, so when the HEROES come rushing in, they won’t slip and fall on it or get cut by it. Basically, I’ll still be dead, but I guess that’s considered acceptable. Not by me it’s not, and boy is my family going to be pissed when they find this out!

You get the point? There are still professionals out there selling products and services based on fear and income-boost based on that fear. It’s NOT responsible by any measure. And it’s not alright by me.